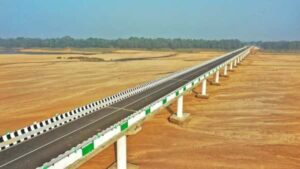 The three retired professors,Bijay,Niranjan and Bimal, meet early morning in the park everyday. Morning walk is their pastime. After  half-an-hour of brisk walking, they sit for a conversation and the most jovial and talkative among them is Niranjan who makes it interesting by making a story out of a news item or article of the previous day newspaper.

It was 6 June,the day after World Environment Day, Niranjan didn’t reach in time. The concerned Bimal was impatient, “Why  Niranjan has not arrived? ”

Vijay with a smile said, “he must be framing a story about last day’s amusing head line, High drama at Biju Pattnaik International Airport. Arrey look, think of the devil and the devil is here.”

After the walking they sat for a chat.

“Come on Niranjan. Give us the news story,” requested Bimal.

“Hope you two have read yesterday’s article about drying Mahanadi. What a sorry state of affairs! Our great river, the life-line of Odisha is drying up. It’s been flowing since aeons ago,originating from the mountains at Chhattishgarh, and enriching the two states.It’s major part is in our state. ”

He cleared his throat and continued,”Mahanadi is the only river in India which deposits the maximum silt. It made the lands fertile and Sambalpur and Cuttack had produced huge crops. Those towns were two famous commercial centers.

After independence Hirakud Dam was constructed on Mahanadi 15 kilometers north of Sambalpur. . It was the longest earthen dam in the World. The huge reservoir made it possible  for multipurpose  schemes like controlling flood, generating electricity and spreading canals for irrigating agriculture fields. Odisha became prominent in world map.

Now Chhattisgarh government has made many barrages on the upper part of Hirakud dam reservoir. The flow of the river is restricted. The govts of the two states faought over it. But to no avail. Power, greed and intollerence, how it is destroying the echo balance !Now there is scanty water under the longest ever bridge constructed over Mahanadi near Cuttack.The river bed gives a picture of a desert, only  sand and sand.

The bygone days’ scenery of men and children bathing and swimming is no more. The beautiful  women carrying dazzling brass pots on waists are rare these days. The poems, novels written on Mahanadi are in large numbers. The river must be thinking how ungrateful  are human beings.I have loved ,helped and cared for them and they have left me to my fate.

A ray of hope is there. Now some activists have come together  to save Mahanadi. They knew govts are only interested  in politics.”

“Cheer up Niranjan, you look disturbed  and dispirited. Why  not we three join in the save Mahanadi movement”,suggested Prof. Vijay.

That morning  the three intellectuals, after their story session decided to fight for their beautiful river. They can’t sit idle to see the downfall of a great vibrant river.